When being the biggest and best isn’t best 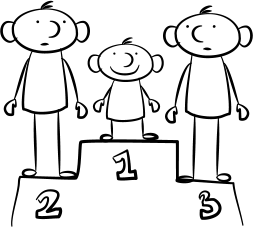 NEWS FLASH: you don’t always have to be the leader in your market to be successful. With so many companies competing for the number one spot, you don’t have to be the biggest or the best, and, in fact, being the opposite can be just as effectively marketed.

Avis, the car rental company, started in 1946 with a grand total of three cars. In 1963 it launched a bold advertising campaign stating ‘We’re only No.2. We try harder’. Being smaller you are able to develop a more individual relationship with your customers and can give a more personalised service with attention to detail. Avis’s campaign is now acknowledged as one of the ten best advertising slogans of all time and regarded as the very essence of the company’s culture. Today, Avis worldwide operates in over 4,000 locations in an impressive 114 countries.

Sometimes recognising that you are not a preferred provider in your marketing communications is not necessarily an acceptance of inferiority. Moro calls itself “the fourth best chocolate bar in New Zealand”. When the top 3 chocolate bars have sold out, or you’re just not in the mood for them, what would be your logical next choice?

In an article from Dee Blick (Founder, The Marketing Gym), she talks about one of her clients, Techmobility, which adapts vehicles for disabled motorists. Rather than trying to persuade dealerships in the Motability industry to move from their preferred provider, they instead sent out cover letters which advised dealerships that when their existing adaptation specialist was too busy or simply unable to adapt a vehicle for any reason, Techmobility were available to step in and help.

The result? Techmobility have since fitted thousands of pounds worth of adaptations for this group of dealers, with many of the dealers referring to the letter as the reason why they had chosen Techmobility.

iiNet launched their “No. 2” campaign in 2011, recognising its position as the second largest DSL broadband provider in Australia. They asked what they had in common with Shannon Noll, Buzz Aldrin and Dannii Minogue. The answer was revealed by company icon “Finn” holding up two fingers in a peace sign with the words “The new No.2 in DSL broadband (we don’t normally brag… I feel a bit dirty).

iiNet are not just positioning themselves as a the next logical choice when you’re unhappy with another “bigger” network, by saying it’s the NEW no.2 implies they have over-taken some older companies and are on the way to no.1. That’s called embed suggestion (“bragging without bragging”), and lets people connect the dots themselves.

Being a second, third, fourth choice for consumers could enable you to clinch a sale and build relationships with potential customers that had previously seemed out of your grasp.