Weeding out bad customers out before they start business with you 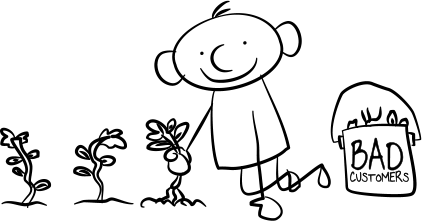 Subjecting yourself to customers’ opinions when you don’t control the outcomes requires a lot of faith in your product – but if you don’t have faith in it, how can you expect anyone else to?

Chevrolet, the American car manufacturing company, began a Flawsome marketing campaign back in 2010. It created a show called ‘Car Hunters’ for online TV channel HGTV and commissioned independent research company GfK to test drive Chevrolets and compare them to similar Honda and Toyota models. Chevrolet had no idea what was going to come of it. GfK used ninety-six prospective new car customers who had no clue that a commercial was being filmed and each car was subjected to 70 tests. Of the ninety-six test drivers, fifty-nine of them chose Chevrolet and the company also came out on top in forty-three out of seventy tests.

It could have swung any way, though I suppose if it had been overwhelmingly negative, Chevrolet may not have published the results at all. Needless to say the company provided customers with a realistic and unbiased look at their cars to help them make an educated buying decision.

Giving a wholistic view might weed out 20% of your customers, but they are most likely the 20% you don’t want anyway. According to LoyaltyOne’s 2011 COLLOQUY report, almost a third of consumers (31%) say they are more likely to tell family, friends, and co-workers about a bad experience with a product or service than a good one. You might remember from my previous articles that isolated negative reviews can benefit a company, but not heaps of them. The best way to avoid excessive negative reviews is to avoid the customers who are likely to give them. Like Tim Ferriss of ‘The 4-Hour Workweek’ says: “Poisonous people do not deserve your time. To think otherwise is masochistic.”

American insurance company, Esurance released a new campaign in late 2011 asking “what makes a company trustworthy?” The commercial suggested that “hearing what a company’s customers have to say” provides the most reliable answer, and encouraged potential customers to check out the brand’s Facebook page to see what its current clients really thought of their service (oh, and FYI … apparently when fans post negative comments, Esurance is virtuous about responding in a timely manner).

Lay your cards on the table. If ‘haters gonna hate’ anyway, let them weed themselves out before they even start business with you. Stop trying to chase anyone and everyone, instead let the ones you want come to you. They’ll be your biggest raving fans and attract more like them to do business with you. Plus you’ll enjoy working with them more.