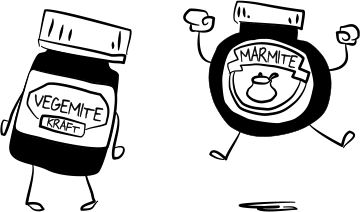 Vegemite, as we know it, had a Flawsome beginning because it was originally invented by accident. It was a German scientist who discovered that brewer’s yeast could be concentrated, bottled and eaten. In 1902 his formula gave rise to the popular UK spread Marmite. Vegemite followed in 1922 when the disruption of British Marmite imports after World War 1 inspired an entrepreneurial Australian food company to develop its own version, which was later acquired by Kraft Foods.

Due to a slowly diminishing market share, Kraft tried to launch something new – reinventing the popular spread by blending it with cream cheese to create a monstrosity briefly known as iSnack 2.0. It’s still around, it’s now known as Vegemite Cheesybite, but its reception has been uninspiring. Kraft later tried to tone down Vegemite’s pungent flavour in a bid to recapture the taste buds of children, and address some of the high-salt health concerns that were putting off young mothers. It created a lower-salt, vitamin B-rich mild version of the spread aimed at infants, which the company called ‘My First Vegemite’. An even bigger failure, it was pulled from supermarket shelves just over a year after its launch due to poor sales.

Facing the same diminishing market share, the UK division of Kraft was also trying to encourage a new generation of consumers to try Marmite. Rather than softening Marmite’s taste and compromising the brand image, they instead celebrated the difference of opinion about the product with a new slogan: “Love it or Hate it”.

When entering the new Marmite website you’re asked “Who are you?” and given the opportunity to enter as a Lover, or a Hater, of the spread. Enter as a Hater and you’ll be welcomed like this: “Eat Marmite? You’d rather rip the wings off live chickens. You’d rather be stripped naked in public. You’d rather swallow rat’s tails and snail shells … Enough already! We get the picture. And yes, you’re in the right place …”

Marmite has created renewed momentum through social media by creating ‘love it’ and ‘hate it’ pages on Facebook and Twitter. The campaign built so much momentum, in fact, that it resulted in the coining of the phrase ‘Marmite effect’ or ‘Marmite reaction’ for anything which provokes such strong and polarised feelings.

A series of humorous images (known as Internet Memes) that have been shared on Facebook contain the words “Haters gonna hate” and nothing could be more true. If people are going to either love or hate your product no matter what, you may as well take control of the conversation and move it somewhere that it can be monitored and monetised (Marmite is now selling ‘Hate’ merchandise to customers they never would have had traditionally).

So what can we take away from the advertising genius of Kraft Foods (the UK division)? If you have a polarised market, ask yourself how you can strike up a conversation with your product ‘lovers’ and ‘haters’ alike. Being Flawsome is when you’re unpopular with a percentage of the marketplace, and you turn it to your advantage.