Could your flaws be holding you back for no reason at all? 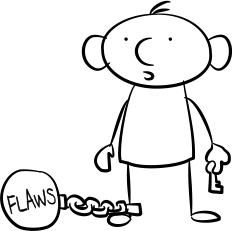 Over 85 percent of all pancreatic cancers are diagnosed late, when someone has less than two percent chance of survival. In a 2013 TED talk, Jack Andraka spoke about how, mostly by researching via Google, designed a test for pancreatic cancer that 168 times faster, over 26,000 times less expensive, and over 400 times more sensitive than the current standard for pancreatic cancer detection… all before his 16th birthday.

Now, a new way of detecting pancreatic cancer might seem a little off-topic for me, but what I wanted to share with you was something young Jack shared with the audience at the end of his talk. He said, “- through the Internet anything is possible. Theories can be shared, and you don’t have to be a professor with multiple degrees to have your ideas valued. It’s a neutral space, where what you look like, age or gender, it doesn’t matter. It’s just your ideas that count. For me, it’s all about looking at the Internet in an entirely new way to realize that there’s so much more to it than just posting duck-face pictures of yourself online. You could be changing the world.”

He’s of course totally right. Times have changed and progressing technology has not only changed the way information is delivered, it has been the catalyst for a paradigm for the way we perceive authority and credibility.

This young man’s ideas could very well have changed the world. If he had bought into the perceived flaw of being “too young” to be taken seriously or that he wouldn’t be able to get his hands on the information he needed, this story might have had a very different ending, or no beginning at all.

So what’s my point? It would have been impossible for a sixteen year-old like Jack to have made this kind of break through 10-15 years ago. What rules have you set up in your mind for what’s possible? Times have changed and you might just be holding onto a flaw that doesn’t even exist anymore.